New York City- I have to admit I am sad to be writing about this, though something like this was inevitable for the club that throngs of NYC clubbers knew simply as The Limelight.

It was where I landed my first DJ residency, when I moved to NYC in 97 (playing hiphop in the Chapel @ L.O.U.D.’s weekly) and could be seen MCing with some of the world’s best DnB artists for any number of events between ’97 and when the club closed in 2003. With all of the cavernous rooms and hidden passages, there was plenty of illegal fun going on throughout the venue (not to mention a wide variety of sexual adventures for those wild enough to partake), but THAT is another story best kept for private times.

Goodbye old friend, you are missed! 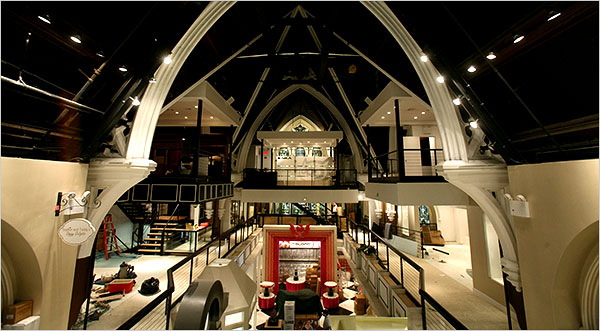 “The Limelight in New York, was owned by Peter Gatien, designed by Ari Bahat & opened in November 1983. Located in the former Episcopal Church of the Holy Communion on Sixth Avenue in an area once known as the “Ladies’ Mile,” located in Manhattan‘s Chelsea district, and originally started as a disco music and rock music club. It earned the media’s attention in 1996 when club and party promoter Michael Alig was arrested and later convicted for the killing and dismemberment of Angel Melendez, a resident drug dealer at the club. The 2003 film Party Monster, starring Macaulay Culkin and Seth Green, was based on this event.”

(From the NYTimes Article):

“Though it’s the sweet tooth that will get the most attention at this shiny new marketplace in the once notorious neo-Gothic Limelight, there are savories, too, including Peak Season, a farmers’ market in what used to be a churchyard, with 8 to 10 stands from nearby growers.

An outlet for Petrossian caviar; olive oils at Carter & Cavero; and Jezalin’s, a fancy-food shop stocked with breads, charcuterie, cheeses and condiments, are all on the first floor, along with Whisk, a cookware shop based in Williamsburg, Brooklyn. Rounding out the edible wares on the ground floor are MarieBelle chocolates; Mari’s New York brownies; Butterfly Bakeshop; Cupcake Stop; It’Sugar, for candy; the Little Candy Cake Company; a bakery called WannaHavaCookie; Baci Gelato; Miss Tea, for teas and accessories; and Jala frozen yogurt. A MarieBelle tearoom is on the top floor. A branch of Grimaldi’s pizzeria will open in about a month, and there are still two more restaurant spaces to be leased.”